Dolphin Encounter in the Bay of Biscay, France 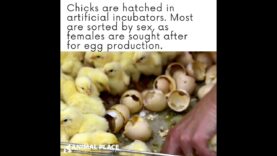 Chicks are Shipped Through the Mail

Did You Pay For Me To Die?

Animal Equality has launched a campaign in the United States to draw attention to the widely unknown practice of male chick culling. Billions of birds across the globe face death on the day they are born simply because their lives are not considered profitable. In the U.S. alone, around 300 million male chicks are killed each year. This means over 34,000 freshly hatched chicks die every hour.

WHY MALE CHICKS ARE KILLED: Because male chicks cannot lay eggs and they are not the same breed of chicken used for meat, these baby animals are deemed worthless by the egg industry and are killed using extremely cruel techniques, such as gassing, suffocation, and electrocution. One of the most common methods used is maceration, in which the animals are transferred to a machine called a grinder and are killed by “shredding.” The birds are alive and fully conscious as their bodies are ground up.

IT’S TIME FOR A BAN: The U.S. is the second-largest egg-producing country in the world, and all mass egg producers in the U.S. cull male chicks or depend on hatcheries that do so. These producers account for 95 percent of egg production. Globally, some six billion newborn male chicks are killed and according to Humane Facts, more than 260 million male chicks are killed each year in the U.S. This practice is unacceptable and must be legally prohibited.

CONSISTENT CONSUMER DECEPTION: Reasonable consumers would not expect egg brands touting themselves as “humane” would allow this practice in their supply chains. Therefore, in addition to animal cruelty, the industry’s practice of brutally killing male chicks raises an issue of consumer deception as well, given the common use of animal-welfare claims on egg products. For instance, even eggs labeled as “American Humane Certified” are produced from supply chains that kill male chicks.

NEW TECHNOLOGIES CAN SPARE LIVES: The routine killing of young and healthy animals has long been unacceptable to animal welfare experts, the general public, and animal protection advocates. With increasing public knowledge and disapproval, the search for alternatives has been intensified. Worldwide, various alternatives to chick culling are currently in development or are being tested to bring this practice to an end.

One example is a technology called “in-ovo sexing,” which allows producers to determine the sex of the embryo before it develops into a chick. In fact, due to the availability of this technology and the outcry regarding chick culling itself, France has pledged to outlaw the practice of culling unwanted male chicks by the end of 2021, and Germany has announced that the culling of day-old male chicks will be outlawed in 2022.

WHAT WE’RE SAYING: “The practice of male chick culling by industrial egg producers is a violent, unnecessary step in an already cruel industry. Animal Equality is calling on the U.S. egg producers to immediately stop this brutality, and asks legislators to act swiftly to ban this despicable killing,” says Sharon Núñez, President of Animal Equality.

IT’S FOR THIS CRUELTY TO END: Either ground-up, electrocuted, or suffocated alive, male chick culling is a common practice of egg producers and must come to an end. Animal Equality has been putting pressure on producers across the world and with our new campaign, we are bringing this relatively unknown issue to light in the U.S. We need the help of compassionate consumers like you to make a difference—please sign our petition calling for a ban to this violent practice and share this campaign with your networks. The truth of what happens on egg farms must be exposed.

Chicks are Shipped Through the Mail

Animal Rights is shocked by the conditions in which the laying hens in the Flemish egg sector have to live.

The Illegal Offering of Immature Native Turtles for Sale: A PETA Eyewitness Investigation

McDonald’s: The Secret is Out

Start Your New Year By Being a Hero For These Animals

Tigers and Public in Danger at Roadside Zoo

This Chinchilla and More are Killed for Fur

🇬🇧 In relation to the topic treated by the site, some content present may contain strong images or cruent scenes that could disturb the sensitivity in emotional people. For more information read the complete disclaimer.